I have received quite a warm welcome back to Vancouver for my doctoral graduation today. Ian Young has done a masterful job of quoting me in today’s edition of the South China Morning Post. 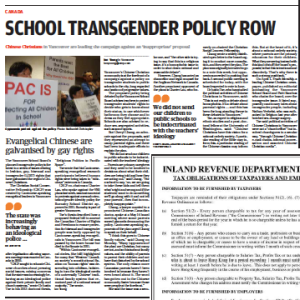 The article is about how Chinese Christians — in particular, Cantonese-speaking evangelicals — in Vancouver are contesting the Vancouver School Board’s proposed policy for transgender faculty, students, and staff. There is both a main article and a side column based mostly on a reading of chapter 5 of my dissertation.

The controversy centers on those who have opposed the policy because they feel that their ‘parental rights’ to educate their children primarily in the private sphere have been violated. As I explained to Young:

This is not really a debate about homophobia. It’s a debate about parental rights … and this has been the long-standing theme in these debates in Vancouver…Chinese Christians have this vision for a rational orderly society. A particular reading of the Bible may inform this, a particular reading of the Chinese classics may inform this. But at the heart of it, it’s about a rational orderly society, where parents are the primary educators for their children. What they are seeing instead with this kind of stuff [the board’s proposals] is that this is irrational and disorderly. That’s why there is such a strong pushback.

In addition, I emphasized that these political activities ‘were not a “church effort” but involved churchgoers in a secular way, “through Chinese Christian e-mail chains, informal conversation and assorted Chinese Christian media”.’

I am very thankful to Ian Young for our collegial relationship. He first contacted me last year about an article on youth transitioning to adulthood between Hong Kong and Vancouver, a topic that Jo Waters and I had written on in Global Networks. I found Young’s questions very perceptive and incisive, always pushing me to draw out my points, to illustrate with examples, and to pose counter-illustrations. I suppose I should expect no less from the former International Editor of the SCMP, but I must say that it is always a pleasure to work with someone at the height of his craft.

I also appreciate how Young engages multiple sources in his account in order to draw out the multi-sided complexity of this debate. His interview with Cheryl Chang is revelatory both because of how Chang insists on her secularity as a concerned parent activist and because she was the legal advisor for the Anglican Network in Canada, a realignment group that sued the diocese for their property because they insisted that it was they who were holding to historic Anglican orthodoxy on theological doctrine and sexual praxis. He not only quotes me about the non-church-based Chinese Christian networks, but goes right to the source, Truth Monthly, one of the two premier Chinese Christian newspapers in Vancouver (the other is Herald Monthly). He has done his research on Charter Lau, mostly through my dissertation, but instead of just quoting the thesis, he has used it to trace the precedents for this poobah in both Burnaby’s Policy 5.45 controversy in 2011 and the ongoing debate about Bill C-279 to amend the Canadian Human Rights Act and the Criminal Code (my dissertation fieldwork took place during the C-389 controversy).
[UPDATE: May 23, 2014: These items have been corrected in the online edition.]

As this information develops, however, I do want to make two very minor clarifications to the record, none of which affect Young’s larger point. The ‘CSCF’ that Young mentions is the ‘Christian Social Concern Fellowship,’ not the ‘Christian Social Conservative Fellowship.’ While many of its members are politically conservative and some are card-carrying members of the federal Conservative Party of Canada, ‘social concern’ is a term derived from mainline Protestantism in Hong Kong to talk about the church getting involved in social action. The second is that the Truth Monthly post date is from the January 2014 issue. That this post predates the debate by four months instead of several weeks in fact strengthens Young’s point about this transgender issue being widely discussed in Chinese Christian media.

Again, many thanks to Ian Young for a very thorough article and sidebar for SCMP. I look forward to further collaboration in the future.