In less than two hours, I will give the introductory lecture in my first course ever. This is a course on American religion, and it is listed as Jackson School of International Studies (JSIS) C254 in the comparative religion unit. 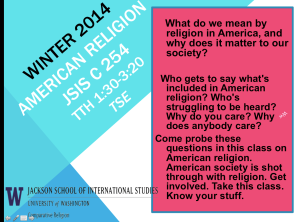 There are four main units in this course. In the first unit, we will explore the making of an Anglo-Saxon Protestant consensus in American religion, and we will do that by reading David Hackett Fischer’s massive tome, Albion’s Seed: Four British Folkways in America. We will then do a second unit in which we look at how this consensus may have broadened out to non-Protestant religions, developed liberal and neo-orthodox strands, and formed some form of American religious pluralism, and to do that, we will read Will Herberg’s class text, Protestant-Catholic-Jew. After that, we’ll problematize the Protestant consensus by looking at race and religion in America. Our key text in this third unit will be James Baldwin’s civil rights book, The Fire Next Time, and we will supplement this unit with articles in Asian American, Chicana/o, and indigenous religions authored by Jane Iwamura, Andrea Smith, Tom Tweed, and David Yoo. Finally, our fourth unit will be on American fundamentalism as we explore the reassertions of the Protestant consensus, and we will read George Marsden’s Fundamentalism and American Culture.

To teach a course on American religion is to initiate students into a widely debated field of research. I understand, for example, that the emphasis of my course seems to be on the Protestant consensus in America may lead some to dispute whether I am privileging certain geographies or religions in America, and I am fully cognizant of revisionist histories that provincialize New England (e.g. Jon Butler’s Awash in a Sea of Faith), that seek to frame American religion via the geography of the Americas (e.g. Manuel Vásquez), and that seek to unsettle settler colonialism by emphasizing indigenous religions and relations. My reply would be that to do revisionist history implies still that there is a historical narrative to be revised, and I would argue that my course seeks to do that by positioning the traditional narratives of American religion via the Protestant consensus alongside the revisionist work on race. Scholars of American religion will recognize, then, that the first two units on the broadening of the Protestant consensus can be traced to Sydney Ahlstrom’s seminal Religious History of the American People. However, with the material on race, this Protestant consensus is actively being challenged and revised by groups with different senses of American geography, whether through a trans-Pacific framing (Asian American religions) or an Americas framework (a Chicana/o and indigenous religions). The idea is to look at how the conventional narratives can be juxtaposed with the alternate geographies.

As such, this course is a course on how religion can be seen as grounded in American civil society. It is not a history course, and it is not a course where we will tick off each of the religions in America. Instead, it asks the broader question of how American civil society is shaped by American religion, and my hope is that students will emerge from the course with the ability to articulate their perspective on that question critically.