On January 22, I gave a talk at Regent College in Vancouver, British Columbia titled ‘”What Can I Do For This City” The Hong Kong Protests and Evangelical Theology.‘ It was a noon hour talk. Here was the description:

Known as the “Umbrella Movement,” the 2014 Hong Kong protests for democracy have captured the world’s attention, not least for the participation of Christians. This talk will trace this Christian democratic tradition to the rise of an evangelical tradition in Hong Kong, emphasizing the separation of churches and the colonial state, and the trans-Pacific dimensions of Hong Kong’s evangelical tradition. This lecture will be of interest to those who want to know why Christians in Vancouver should care about Hong Kong.

We had quite the turnout. Room 100, a standard lecture classroom, packed out. The motley crew appeared to include first-generation Chinese Christian leaders, second-generation pastors, and a diverse crowd of Regent College students. It was – for all intents and purposes – fun!

Regent College did make a recording, and the Cantonese-speaking Omni News also covered the event for that day. We will put a link to the recording here when it is available.

I want to thank everyone who came out on what could have been their lunch hour. Specific thanks go to Regent Bookstore’s Bill Reimer and Regent College VP Patti Towler and Dean Jeff Greenman, as well as Trish Pattenden for organizing and advertising, and Rick Smith and Joe Lee for helping with audiovisual equipment. My hope is that this talk was informative for all who attended and will be useful going forward for Regent College in engaging Asian Canadian and trans-Pacific communities in their endeavour to put an ecumenical flavour of evangelical graduate education to work on the Pacific Rim.

UPDATE: This lecture received full reporting from Ian Young at the South China Morning Post. I’m grateful to Ian for attending and for reporting so generously.

I was recently at the National University of Singapore’s (NUS) 2012 conference, Asia-Pacific Worlds in Motion IV: Fluidities and Fixities.  This is a conference jointly organized by UBC and NUS students working in migration studies.

I was part of a paper session on Transnational Identities and Subjectivities, chaired by Tracey Skelton (NUS) and responded to by Rhacel Parrenas.  I presented a paper entitled ‘A Minority Challenging Multiculturalism: The Social Conservatism of Cantonese-speaking Evangelical Christians in Metro Vancouver.’  Here’s the abstract:

Studies of transnationality in the Asia-Pacific region have recently focused on migration through a given social field over the lifecourse, some nodes centred on education, others on work (Waters 2002; Ley and Kobayashi 2005; Preston et al 2006; Waters 2006; Ley 2010; Lin 2011). While such approaches rightly highlight these migrants’ ties to their places of origin, they seldom explore their commitments to their new destination nation-states. Using qualitative data collected from 40 key informant interviews and four focus groups in Metro Vancouver, this paper demonstrates that one particular, influential migrant group in Vancouver—migrants from Hong Kong who are of evangelical Christian faith—are in fact more committed to Canada than Hong Kong. However, their involvement in Canadian civil society, far from celebrating Canada’s multicultural policy, has sought to challenge multiculturalism on the grounds that their rights of religious freedoms and parental choices in their children’s education have been overshadowed by agendas concerning gender and sexuality. Such political voices have included journalistic postings in English- and Chinese-language media in Vancouver, activist organisations, and the success of Cantonese-speaking evangelical Christian candidates for the Conservative Party in federal elections. Given such a wide range of political participation, I argue that the social conservatism of Hongkonger evangelicals, while contextualised by a transnational social field, signifies an attempted integration into Canadian civil society by challenging the state’s multicultural policy. This paper advances discussions of fixities and fluidities in Asia-Pacific migrations by outlining the development of a socio-political agenda by transnational migrants for their destination countries, not only their places of origin. 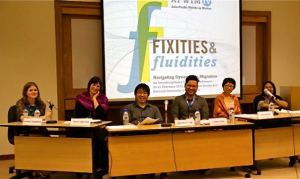 For more information about the conference, please see the Asia-Pacific Worlds in Motion website. We hope to have the fifth installment at UBC Vancouver.

My first article is finally out in press.

It is entitled ‘Making a Cantonese-Christian family: quotidian habits of language and background in a transnational Hongkonger church.’ It is part of a special issue of Population, Space, and Place: A Journal of Population Geography on Migration and Everyday Matters: Materiality and Sociality.  Edited by Elaine Ho (Leeds) and Madeleine Hatfield (Royal Holloway, University of London), this issue represents an approach to geographies of migration from the ground up.  We investigate everyday lives and quotidian geographies: how is space materially and socially created by people who have moved from one place to another?

My contribution tackles geographies of everyday life in both the religious dimension and the Hong Kong-Vancouver migration network.  This is based on my MA research, which took place in a transnational Hongkonger church in Metro Vancouver I have anonymised as St. Matthew’s Church.

This paper looks at how St. Matthew’s Church became and is continually reinforced as a transnational Hongkonger church.  For the examination of everyday lives, I use the work of Michel de Certeau in The Practice of Everyday Life as an heuristic, differentiating between strategies in which ordinary citizens consciously plot political resistance and tactics in which people unconsciously and unreflectively use everyday habits to prop up their lifeworlds.  As I suggest in the paper, most of what goes into making a Cantonese-Christian family are everyday habits (de Certeau’s tactics) that are often subtle, unconscious, seemingly insignificant, and unreflected upon, but which turn out to be politically constructive at the end of the day. By advancing the geography of religion, I also am working within the boundaries of new cultural geography in which James Duncan famously showed in The City as Text that geographical landscapes, networks, and spaces don’t just exist superorganically in some abstract space above us, but are in fact constructed politically over time.

Studies of the Hong Kong-Vancouver transnational migration network seldom pay close attention to religion in the everyday lives of Hongkonger migrants. Based on 9 months of ethnographic fieldwork at St. Matthew’s Church, a Hong Kong church in Metro Vancouver, this paper examines the tacit assumptions and taken-for-granted quotidian practices through which a Hongkonger church is made. I argue that St. Matthew’s Church has been constructed as a Hong Kong Cantonese-Christian family space through the everyday use of language and invocations of a common educational background. This argument extends the literature on Hongkonger migration to Metro Vancouver by grounding it in a religious site whose intersections with Hong Kong migration to Vancouver consolidates the church as a religious mission with a specifically Hongkonger migration narrative. This consolidation is problematised as I show that contestations in church life by migrants from the People’s Republic of China over language and asymmetrical educational backgrounds both reinforce and challenge the church as a Hongkonger congregation. Through an examination of these everyday interactions at St. Matthew’s Church, this paper advances the geography of religion as I demonstrate that specific geographical narratives and networks shape quotidian practices in religious sites.

The paper is available on Wiley-Blackwell’s Early View.  Inquiries regarding the paper can be directed to: jkhtse@interchange.ubc.ca or tse.justo@gmail.com.

***MANY THANKS TO THOSE WHO HAVE SUBMITTED FOR THE DECEMBER DEADLINE ALREADY.  WE ARE ANNOUNCING A DEADLINE EXTENSION FOR ABSTRACT SUBMISSIONS TO: 22 JANUARY 2010.***

We invite graduate students with an interest in trans-Pacific migration to attend and present a paper at a conference in Vancouver in June 2010. The conference focuses on the construction and maintenance of identities in the Pacific region from political, economic, and socio-cultural perspectives. Recent literature on nation-states, transnational networks, economic integration, and late capitalist logics of governmentality in the Pacific region have identified phenomena that are said to include rapid urbanization, the emergence of nationalisms, technological advances, increases in the speed of information, and the formation of transnational networks through migration and media. How has the emergence of such Pacific worlds in motion affected the construction, maintenance, and imagination of identities in the Pacific region? Have identities also become mobile in trans-Pacific worlds in motion? What kinds of political, economic, and social identities have emerged from such mobility, and how are they to be discussed? This four-day conference will include two days of papers and a day trip to Richmond, BC, a Chinese ethnoburb south of Vancouver that will serve as a local site to ground discussion on Pacific mobile identities. Our hope is to begin and continue a discussion on these Pacific identities in motion from a variety of perspectives as we seek to understand more fully our present experience of Pacific worlds in motion.

Pacific Worlds in Motion is sponsored by one of the University of British Columbia’s graduate residential colleges (St. John’s College). It aims to bring together graduate students and early career researchers from all disciplines pursuing research on Pacific Migrations. Preference will be given to those who have chosen topics that explicitly deal with questions and issues specifically pertaining to the issue of Pacific identities in motion. We hope that this conference will begin mentoring relationships among senior scholars, early career researchers, and graduate students.

© Justin K.H. Tse 2009-2020. Unauthorized use and/or duplication of this material without express and written permission from the author and/or owner is strictly prohibited. Excerpts and links may be used, provided that full and clear credit is given to Justin K.H. Tse with appropriate and specific direction to the original content. All views that I have published here, and in any media form, are my own.